Arduino Due is finally here: after more than one year since its announcement, the more powerful new version is available to everybody. The new board has been designed around a 32 bit Arm Cortex M3 architecture implemented through the Atmel Sam3X instead of the old 8 bit ATmega328P installed on the glorious Uno. Many articles has been written about the new huge number of GPIO, ADCs and new interfaces available on the new born in the Arduino’s family but we have not seen yet nobody talking about the missing ones, in particular the ethernet connection. The question came up during comparison between Due and MBED (LPC1768) which uses a comparable Cortex M3 made by NXP (LPC1768): why does MBED have a ethernet connection available and Due does not? The answer is not so obvious: looking at the datasheet of both microcontrollers [1] [2] we discover that they have a Ethernet MAC compatible with the IEEE 802.3 standard interface (layer 2 datalink of the ISO/OSI stack). In order to have a full ready to use Ethernet interface, both Sam3X and LPC1768 need a Ethernet PHY IC such the DP83848J made by National Semiconductor (bought by Texas Instruments) used on MBED [3] which implements the layer 1 (phisical) of the ISO/OSI stack. We can guess that arduino team already explored this option as visible looking at the official eaglecad files [4]: 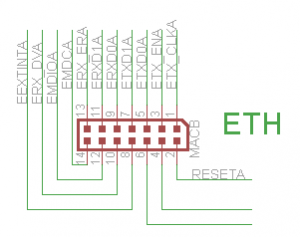 As you can see there is a disconnected “ETH” connector on the right hand side of the pcb which is not included on the actual Arduino Due version; we believe that the not only the Arduino Due delivery was troubled but after 14 months since its first announcement the board is still under development.